Winner of the 2022 Gordon Burn Prize

Publisher: And Other Stories 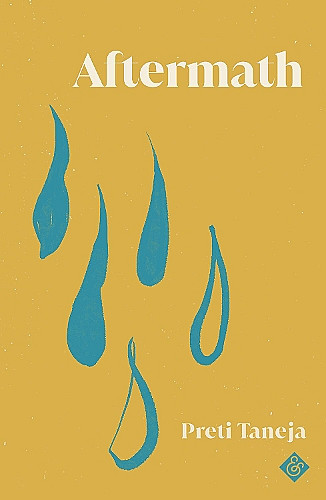 'Aftermath is a major landmark in British narrative non-fiction. It's a beautiful and profoundly important account of creative writing teaching as a radical act of trust and interrogation of power; its anti-racist and abolitionist stance makes it a vitally important as well as deeply moving book to read now in these dismal days for the British political project. It is fearless in the way it shows its agonised workings as it unfolds into a complex map of grief.' Max Porter ---- 'Astonishing. Radical, beautiful, broken, intimate. A surge. A yearning. A tribute. An indictment. You won't read another book like this ever. Taneja's attempt to wrestle with so much, with radical empathy, survivor's guilt, politics - is a masterclass work of literary brilliance.' Nikesh Shukla ---- 'It takes a rare talent to respond to a shattering act of violence by reassembling the pieces in a way that refuses easy explanations or platitudes, but is illuminating, daring, world-expanding. Essential, in the truest sense of the word.' Daniel Trilling ---- 'This is a remarkable book: generous, searching, insightful and searingly intelligent as it draws out the complex relationship between writing and terror, language and the unspeakable, trauma and event.' Olivia Sudjic ---- 'Aftermath is written from the heart. I am both impressed by it and so grateful that someone has tried to make some sense of the many issues surrounding what happened at Fishmongers' Hall. There is so much truth in this slim volume.' David Merritt, father of Jack Merritt ---- 'Aftermath is a book that's almost impossible to categorise: it sits in a tradition of bereavement literature; it sits with poetry. There is no fake moralising in its pages, just Taneja patiently walking us through the wreckage of unimaginable grief, noticing everything, lifting up the rubble, she makes us question everything we know and hold fast - a courageous and brilliant book.' Mona Arshi ---- 'A study, a song, a calling - Taneja's work offers a crucial and radical account of control, conviction, complicity and trauma.' Eley Williams ---- 'Aftermath is not just a personal reckoning with tragedy, it's a piercing inquiry into the ways criminality is perceived, and yet what Taneja does so skilfully is carefully unpack the complex systems violence emerges from. This is an inspired book fortified with acute contemplation and courage, a book born out of a love for the world and the people in it.' Anthony Anaxagorou ---- 'Aftermath is one of the most profound, urgent and thought-provoking books I've read in years. Taneja makes of the already capacious creative non-fiction form one that is all her own, and which enquires, with devastating and poetic precision, into the connections between language, violence, structural racism, the purposes of reading and writing fiction, and so much more. She invites the reader to share in her enquiry to narrate the unnarratable, and, through doing so, to locate a genuinely radical form of hope.' Clare Fisher ---- 'In this stunning book, light bleeds into darkness. An astute indictment of our carceral system and the violence it perpetuates, it is also a compassionate meditation on our interconnected lives. Taneja blurs the lines between literary genres so that the divisions between 'us' and 'them' also blur. She invites us to grieve and yet still be angry enough to demand change - to ask deep structural questions and to imagine new possibilities for justice. I was challenged, inspired and grateful for every word.' Tessa McWatt ---- 'This searing abolitionist work sees, and refuses, other prisons too - of narrative-for-hire, racial shame, the trauma industrial complex, cause and effect. It tries to convince no one of nothing, to confess nothing to no one. Instead it breaks sentences and pages open, makes language rush into you (you are an estuary, the dam is gone). Its shape is unmappable. It lives on as a drumming in your head.' Maria Tumarkin ---- 'A tremendous feat of scholarship, of historical interlacing, of contemporary criticism, of literary examination, of ethical clarity and personal interrogation and, most indelibly, of grieving.' Gina Apostol ---- 'With We That Are Young, Preti Taneja established herself as one of the most courageous and lyrically gifted writers of her generation. Here again she offers living proof that great literature does not rise fully formed from the canon. It begins, rather, with the anguished sifting of its fragments in the aftermath of tragedy, and a grasping in the dark for voices worthy of trust, until its urgent call for equality and dignity comes true - first on the page, and then in the hearts and minds of all who read it.' Maureen Freely