One SAS Trooper's Extraordinary Account of the Falklands War 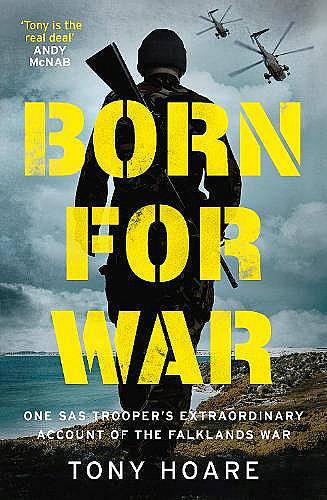 The full, boots-on-the-ground story of the Falklands War, from a soldier at the heart of the action, published for the 40th anniversary of the conflict.

The full, explosive, boots-on-the-ground story of the Falklands War, from a soldier at the heart of the action, published for the 40th anniversary of the conflict.

Tony Hoare always knew he wanted to be in the SAS.

Both his grandfather and father had been soldiers, and so Tony signed up for the Cadets at 13, then the Infantry at 17 and enlisted into the Royal Green Jackets before passing arduous SAS selection in 1978.

Less than four years later, Tony and his team were sent to a collection of islands just off the coast of Argentina called the Falklands, where tensions were rising and war was on the horizon.

No amount of training could prepare Tony for what happened over the course of the next twelve weeks, as the Falkland Islands became a battleground between British and Argentinian forces. As helicopters crashed and ships sank, Tony, at the centre of the action, battled across treacherous terrain and against a fearsome enemy, doing whatever it took to retake the islands.

From one of the only soldiers who was on the frontline throughout the entire conflict, this is a thrilling account of what really happened in the Falklands, an explosive story of land, sea and air battles from a trooper who saw it all.

'There is no higher accolade than a fellow solider wanting you to be beside them in the fight. Tony is the real deal and a personal hero of mine. All soldiers would have wanted him alongside them when things got brutal. This is a no holdout account of the Falklands War from a man who was in the fight' -- Andy McNab