This paperback is available in another edition too: 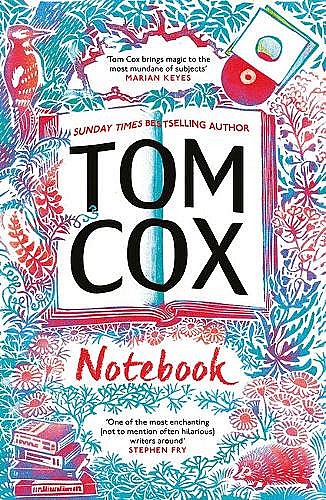 This selection of writing by Sunday Times bestselling author Tom Cox contains his unfiltered thoughts on footpaths, wood pigeons, mixtapes and much more

Sure, sex is great, but have you ever cracked open a new notebook and written something on the first page with a really nice pen?

The story behind Notebook starts with a minor crime: the theft of Tom Cox's rucksack from a Bristol pub in 2018. In that rucksack was a journal containing ten months' worth of notes, one of the many Tom has used to record his thoughts and observations over the past twelve years. It wasn't the best he had ever kept – his handwriting was messier than in his previous notebook, his entries more sporadic – but he still grieved for every one of the hundred or so lost pages.

This incident made Tom appreciate how much notebook-keeping means to him: the act of putting pen to paper has always led him to write with an unvarnished, spur-of-the-moment honesty that he wouldn’t achieve on-screen.

Here, Tom has assembled his favourite stories, fragments, moments and ideas from those notebooks, ranging from memories of his childhood to the revelation that 'There are two types of people in the world. People who fucking love maps, and people who don't.'

The result is a book redolent of the real stuff of life, shot through with Cox’s trademark warmth and wit.

"A fabulous and eclectic selection of intelligent thoughts and observations, and humorous vignettes" NB Magazine