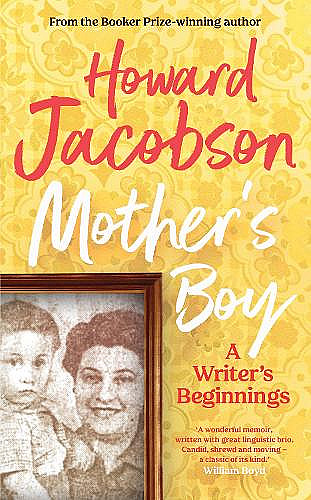 'A wonderful memoir, written with great linguistic brio. Candid, shrewd and moving - a classic of its kind,' William Boyd

Howard Jacobson's funny, revealing and tender memoir of his path to becoming a writer.

It's my theory that only the unhappy, the uncomfortable, the gauche, the badly put together, aspire to make art. Why would you seek to reshape the world unless you were ill-at-ease in it? And I came out of the womb in every sense the wrong way round.

In Mother's Boy, Booker-Prize winner Howard Jacobson reveals how he became a writer. It is an exploration of belonging and not-belonging, of being an insider and outsider, both English and Jewish.

Born to a working-class family in 1940s Manchester, the great-grandson of Lithuanian and Russian immigrants, Jacobson was raised by his mother, grandmother and aunt Joyce. His father was a regimental tailor, as well as an upholsterer, a market-stall holder, a taxi driver, a balloonist, and a magician.

Grappling always with his family's history and his Jewish identity, Jacobson takes us from the growing pains of childhood to studying at Cambridge under F.R. Leavis, and landing in Sydney as a maverick young professor on campus, through to his first marriage, the birth of his son and beyond.

Full of Jacobson's trademark humour and infused with bittersweet memories of his parents, this is the story of a writer's beginnings.

'Laugh-out-loud glorious and uproarious of course - but don't let the self-ribbing fool you; this is deep and poignant,' Simon Schama

A wonderful memoir, written with great linguistic brio. Candid, shrewd and moving - a classic of its kind. -- William Boyd
Side-splittingly funny and serious, too, Howard Jacobson has written one of the all-time great memoirs. -- Nicholas Lezard * Daily Telegraph *
Mother's Boy is a synthesis of his life's work...as well as an original story... it is every bit as funny. -- Toby Lichtig * Times Literary Supplement *
Laugh-out-loud glorious and uproarious of course - but don't let the self-ribbing fool you; this is deep and poignant. -- Simon Schama
[A] brilliantly funny memoir. -- Kathryn Hughes * Sunday Times *
Mining down to the roots of his creativity, Mother's Boy is very funny, profoundly serious and demonically fluent. If there is a better contemporary account of the cost of becoming a writer, I've yet to read it * Spectator *
Howard Jacobson meticulously chronicles his lifetime of failures. But with the rat-a-tat-tat delivery of a great stand-up, he brilliantly transforms calamity into rip-roaring comedy. -- Craig Brown * Mail on Sunday *
Pure delight. Witty, sometimes acid observations jostle with tender reminiscences and enduringly wise insights into what it is to be a Jew, a man, a human being. Its joys help explain why Howard Jacobson is rightly regarded as one of Britain's very greatest writers. -- Jonathan Freedland
Utterly captivating... behind the comical grandiosity of Mother's Boy, there is a sense of something much graver and more sombre, to do with...lifelong struggle. -- Alex Clark * Guardian *
Howard Jacobson has always been hilariously brilliant at writing fictional versions of his life. He can, it turns out, also tell the real story with all that brilliance and hilarity, with the added gain for the reader of finding out what - and who - made him that writer. -- David Baddiel